Since we last gave an update, we’ve made design changes to our art style and achieved some terrific progress.

Paul Murray is our team’s Systems Designer, focused on the algorithms to make the world balanced and tactical combat challenging. He was the first engineer at SSI in the early 80s and stayed with that company well into the 90s finishing up with the extremely successful Panzer General series. We asked Paul to comment on some recent games, to help give our fans some insight in what he seeks out in play and, by extension, what items he will emphasize in Seven Dragon Saga.

His first review is a two-parter on Dragon Age: Inquisition. Paul has already spent numerous hours on the first two games of the series. Here is part 1.

Reflections on DAI on the PC

Since all reviews are done with a bias, I will tell you a little about the kind of gaming I like.

First of all I am not a dextrous player… I am not great at timing defenses and I like a game that provides me a challenge without making me go to extensive effort.  Assuming I can trust the AI, I like to run mostly from my character’s perspective, with occasional pauses to give special orders to companions…  I have never found an AI that I can really trust.

Secondly, I play games that I like to death (and beyond). I am an incurable character tinkerer and will play the first quarter of a game about eight times as much as the rest of a game, trying out this character’s skill combinations or companion combinations.  Despite that (or because of it?) I think the first part of most games lack much flavor. It seems strange to me that a starting character with a background that indicates he has been training since a boy can barely swing a sword, and yet a month later (after gaining 7+ levels) he will have achieved his core ability set. Why not start that way, and then go up a bit from there?

And that is how we intend to start out Seven Dragon Saga. Our party of heroes is supposed to be experienced, so they will have a rounded set of abilities, and advance from there. There are some technical reasons games start players as wimps, such as introducing one ability at a time, and giving starting players fast rewards — ding! another level. But we overcame this problem back at SSI when we did games in series, like Curse of the Azure Bonds.

Next, I am a semi-immersive player. I choose a character’s personality, goals, and ethics when I start a game and try to stick to it.  Semi-immersive because I will give in and make out of character decisions if it will nerf me not to. (I have never gotten through Lothering without asking for rewards from Bodhain, Sir Bryant,  and the Redcliffe Knight).

Lastly, I still play table top RPG with miniatures, etc.  I really like the tactics.

Okay, to my thoughts on DAI.  Note that I have played the first 6 levels about 7 times, so don’t have a full perspective of the game. But I can tell things that I like and don’t like about it. 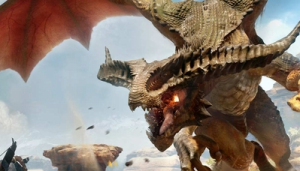 It is beautiful, it feels real to me. Good job!  On the other hand I miss the slightly cartoonish but truly beautiful characters I had in DA2.

While it still has a basic plotline you need to follow, the world is really big and fairly open. This is not Skyrim, but close. It also has an open structure so it doesn’t feel like you are being channeled at all.  Way, way, way, way better than DA2.  I am going to see what happens in some play through if I ignore the plotline and just adventure. Since things respawn, I should be able to keep adventuring for a long time. I expect I will hose myself.

Talking of spawning. The spawning rate of monsters is pretty good. Not like an MMO where things spawn so fast that you don’t feel you are accomplishing anything, but fast enough for continuous random encounters.  Exception: I really hate that if you load a saved game in the wilderness you are likely to reappear amid enemies!

Bioware surpassed itself with NPC personality development and conversation.  I know this is a minority opinion but I love Cass. She has (eventual) fairness, integrity and a sense of humor (even if she doesn’t crack jokes).

I like that your decisions mean something.  From reading the forums, this appears to be at about the same level as DAO… your decisions make a difference, but you are still led through chapters to the end game. Meaning you can’t just kill an annoying cleric early on, and damn the consequences.  On the other hand it does not appear that you are forced to do things that are against your code to progress in the game.

Combat is interesting with cross class combos that work a bit better. Some classes are much harder to play than others, until you get to high level and have super customized equipment.

Characters have a decent set of abilities, no one best build and room to tinker.  They introduced guard and barriers which act as temporary hit points, a really good idea.

Next time, I’ll go over the areas of DAI, which I find detract from the overall experience, and how we might address them in SDS. In the meantime, I’ll be playing more DAI, and trying the master the game.

It’s hard to believe 2104 is already coming to a close. However, we’re very excited to be providing part 2 of Paul’s thoughts on DAI and sharing more about our work in 2015!

On behalf of the entire team at TSI, we would like to wish all of you a very Happy New Year!